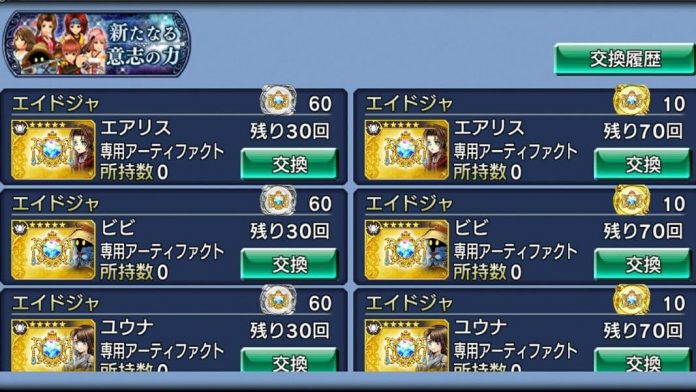 First of all I want to state that this is my personal opinion based on my experience, which means you don’t have to agree with me nor follow me blindly.

So here are my tips:

I’ve seen people claiming you should max 3* artifacts if you have them sitting around. There is nothing wrong with that, but I rather use them as fodder to max 4* artifacts. Those give you 2 abilities, so a higher probability of hitting the one you are aiming for, and they are the main source of EXP you will be using to max your 4* artifacts.

2. Focus on artifacts for your stronger characters or those you are QUITE CERTAIN you will be using in the near future

This sounds very obvious, but earlier on I made the mistake of diversifying artifacts as much as I could: “Why not maxing some artifacts for X, maybe I will use him eventually.” Well beautiful OP, what is the harm of giving some boost to random characters,? – you may ask incredulously. The problem is that you are wasting resources on a character that will have none or low utility to you. Artifact farming and leveling is a PAIN IN THE ass, so you want to focus where it matters. This brings us to point 3:

I’m terrible at management. I remember playing RPGs like diablo or Dragon Age and saving EVERY DAMN EQUIPMENT I would find. So maybe this is my problem, but i brought the same mentality to this game and I was saving every single 4* artifact I could. This led to a huge headache, because the storage in this game is small and you probably don’t want to spend hundreds of gems expanding it so what I would do was: play the level -> get artifacts -> try to play again -> get told I was full -> feed the few 3* I had to someone -> play again -> try to play again -> get told I was full -> etc. You can tell how fucking stupid this was and how even more tedious leveling artifacts became. Now I don’t think twice: when I get copies of characters I don’t give a shit about (even if they are considered powerful by some) I feed them to the ones I’m actually focusing on. This is helpful in two ways: It nearly – if not completely – eliminates the issue with storage, and also makes leveling faster because, GUESS WHAT?? 4* artifacts give more EXP.

4. Use the max 5* artifacts as both fodder and limit-breaking for new artifacts

This is also very obvious, but maybe you don’t know that the passive given by an artifact is there even if you don’t equip it. So don’t fear and feed that artifact to another 4* of the same character. Could you use it as only EXP fodder for a different character? Yes, but it is less efficient. However, if you have 5* artifacts of shitty characters sitting around I would use them on the ones that matter.

5. Be careful to not waste EXP

This is another obvious one but I will mention regardless. Since artifact farming is annoying, be careful to not waste EXP. Let’s say you feed 2x 5* artifacts to LB a 4* but you lack the third one to MBL it. I’m not sure in this case, but for the sake of the argument, let’s pretend that the EXP 2×5* artifacts give you, is more than the EXP needed to max 14 lvls (2LB 4* artifact) by 2 thousand. It means that those 2 thousand EXP will be lost, and that’s a shit ton of EXP. Same with artifacts that are near the end of maxing: why using a 3* that gives you 800exp if a 2* would be enough? If you are lacking the 2*, just do a the lowest tier of WoL and get some, since you will need tons of those anyway.

These are my short tips and I hope they are somewhat useful to some of you. Feel free to tell me you love me or to flip me off in the comments.