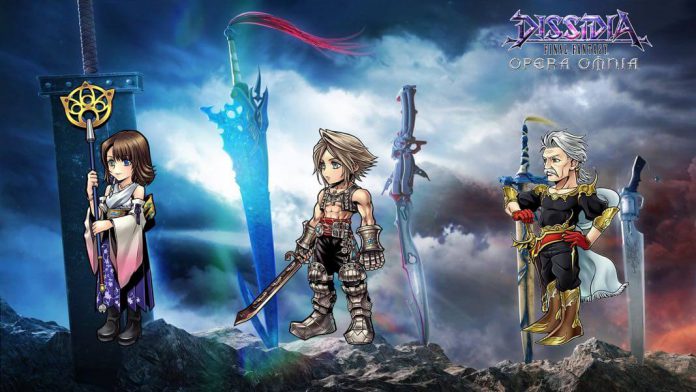 I’ll start of by saying this is an amazing team. I got 30K score on the Vanille LC with 0 hp loss using this team and 29K score on the Kuja EX. I do need to add that both these two scores are done with a Kuja support unit, a Vaan support would also work, but might take a few extra turns. BTW, a huge thanks to anyone who has built up a strong Kuja within such a short time and set him as support to help out the rest of us not lucky enough to get his 35cp.

If we look at the team structure, it’s a very traditional setup that anyone who’s played RPG game is familiar with.

These three characters each fulfill a different role and together they make a lot of hard content a piece of cake. This team might not be the fastest team or the team with the highest DPS, but it could be considered the safest for a lot of content.

Vaan is one of the strongest hitters in this game, with competition from only Prishe, Kuja and Squall (feel free to correct me and add more names here). Also, because both his skills have the potential of hitting twice max brv, his damage per turn is very high. Since the other two members of this team, Galuf and Yuna don’t have any brv+hp attacks and are therefore less turn efficient, having a strong DPS who can unleash huge damage in a single turn is ideal.

Galuf simply bullies any enemy that does physical attacks. The Malboro tries to impale you, dodge and counter. The Queen Lamia wants to strangle you, dodge and counter. The furious birds goes crazy with 12k brv, dodge and counter. It doesn’t matter if there are two enemies or three enemies, nor does it matter how high their brv is, Galuf will bravely stand in front of his teammates and laugh at the enemies with his dodge and counter. Galuf is the only tank in this game who can handle hp attacks, he’s also the only tank who does damage outside his own turn (Wakka and Cater also counters when dodging but neither of them tanks). Since Vaan has limited skill uses and Yuna does not shave break or heals, Galuf helps ensure this team stays at high hp and with his 35cp, his counter hits real hard, so he could be breaking enemies now and then and act as a secondary brv shaver.

Yuna is a buffer and a brv battery. She helps brv attacks hit harder with her buffs and helps hp attacks hit harder by providing teammates with brv. Since Vaan has limited skill uses and Galuf doesn’t have any brv shaving skills, all they could do is brv attack and hp attack most of the time. This is where Yuna comes in. Since she has a large number of battery uses, it’s safe to spam some of them during the trash waves to speed things up. Also, because Yuna’s skill has high turn rate, she could potentially hp+ and then esuna to stop a teammate from getting broken. With cover and counter from Galuf and esuna from Yuna, it’s generally safe for this team to dump their brv without worrying about getting broken.

More importantly, Vaan has a passive “buffed attack” which raises attack with buffs. Vaan’s own buff from Red Spiral only last 4 turns. If we alternate between the buffs from cheer and red spiral, we could ensure that buffed attack is active most of the time, so Vaan can hit a lot harder. Also, I believe the cover buff from Galuf also counts as an active buff.

As for Galuf, he has a very nice max brv buff from his 35cp (60%, which is the same as the buff granted by Sazh) but does not have means to fill it up fast until he masters the skill and counters. So Yuna’s brv battery can help Galuf a lot during the trash waves. It should also be noted that Galuf won’t be able to cover when he’s paralyzed or enticed (yes, I’m talking about you, Queen Lamia), and esuna helps with these situations.

Other candidates for the DPS slot would be Lightning, Tidus, Prishe, Papalymo, Squall and Kuja.

The problem with Lightning, Tidus and Prishe is that they are too fast, so the cover buff from Galuf might run out before Galuf has a chance to re-apply it.

The problem with Squall is obvious, he doesn’t work with brv batteries unless they also raise his int brv.

So Papalymo and Kuja would be better choices. Also, their own buffs does not overlap with Yuna’s buffs, so they could benefit the most from Yuna (Kuja might suffer from having too many buffs if we count cover from Galuf, so let’s wait for the day when they increase the buff limit to 6)

Other supports able to fill Yuna’s role are Aerith and Eiko. You might actually have a chance against magical attackers with Aerith since she can revive a dead Galuf (but the score would be ugly and it’s just too cruel to watch the old man die again). These two wins in terms of hp heal and brv shaving (Aerith’s brv+ hits pretty hard) and Yuna wins with better buffs. Ah, and there’s Sazh, but you could probably just play offensively with Sazh. Just in case someone is using Sazh with Galuf, you don’t necessarily need to buff Galuf with Sazh because Galuf already has 60% max brv buff from 35cp and he’s likely to stay at high brv due to counter so atk doesn’t matter that much to him.

I really don’t have much experience with other tanks and because Galuf is the only one who can handle hp attacks (note: Edge can dodge hp attacks with smoke screen, but his aoe taunt is only one turn and he doesn’t counter so you still need other ways to shave brv) so I can’t make any recommendation here. You could potentially replace Galuf with a debuffer (preferably one with poison to control enemy brv) or a fast character like Lightning or Tidus, but that would be a entirely different team.

A huge thanks to anyone who’s had the patience to read through this block of text, I hope this write-up could help some of you guys who’s not lucky enough to get weapons for the “meta gods”. Especially, if you happened to get Galuf 35cp while chasing Eiko, give him a try. He works wonderfully for the Squall/Vanille/Setzer/Faris/Ramza/Eiko (yes, you don’t need to worry about not killing the adds in time because they can’t touch Galuf) LCs and the Kuja EX. He will become even better with his awakening where he counters with hp attacks, provides the party with brvs and has an amazing hp+ similar to Sazh’s. The gems and tickets you spend on the summer banner No.2 is definitely not a waste.