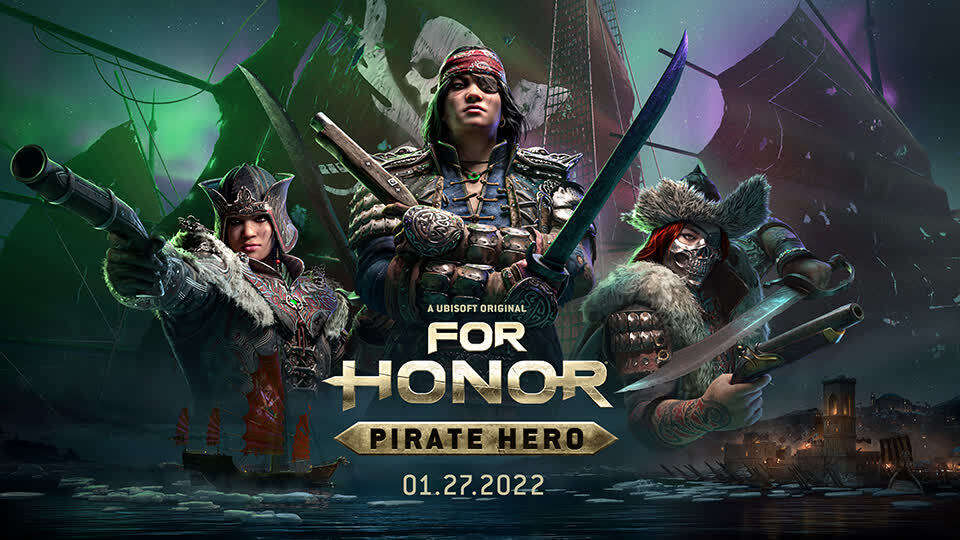 For Honor is entering the next stage of warfare, as the new Pirate hero joins the fray, wielding a cutlass and a pistol. The Pirate hero and their swashbuckling crew join the fight on January 27 as part of title update 2 for Year 5 Season 4: Frozen Shores.

Announced in a blog post, the Pirate hero is the first member of a new faction, the Outlanders group. The Outlanders will be a collection of heroes that don’t have any cultural links between them, instead all being free adventurers and explorers. In the character trailer, the Pirate is shown to wield a cutlass and a flintlock pistol, although it’s unclear exactly how the pistol will function in a game focused primarily on melee combat.

A good blade, a few tricks up the sleeve, and a nice crew is all that's needed. Get to know the new Pirate hero and their plundering crew when they arrive January 27 in For Honor. pic.twitter.com/uOHiXbs2dk

The Pirate will be available for $8 USD at launch, bundled with an exclusive ornament, an elite outfit, seven days of Champion Status, and three scavenger crates. The Pirate will be available to unlock with 15,000 steel starting February 10. January 17 also marks the start of the Pirates of Aurora event, which lasts until February 17, adding a free event pass to For Honor.

Ubisoft also teased the upcoming Year 6 of For Honor, which will consist of four seasons, bringing two new heroes to the Outlanders. Year 6, titled New Horizons, starts on March 17.

Arma 4
May 18, 2022 0
Bohemia confirms the first details on the next installment in the mainline series.
Read more

Everything We Know About Fade, The New Apex Legends Mobile Character

Android
May 18, 2022 0
As the first legend to debut on Apex Legends Mobile, Fade has made a very unique entrance. Here's a closer look at the man behind the mask.
Read more

Games
May 17, 2022 0
There's another Hulk in the MCU, but she's doing things a little differently from her cousin in her new Disney+ series.
Read more

Games
May 17, 2022 0
You can always have more storage to play extra games on Steam Deck with some external help.
Read more