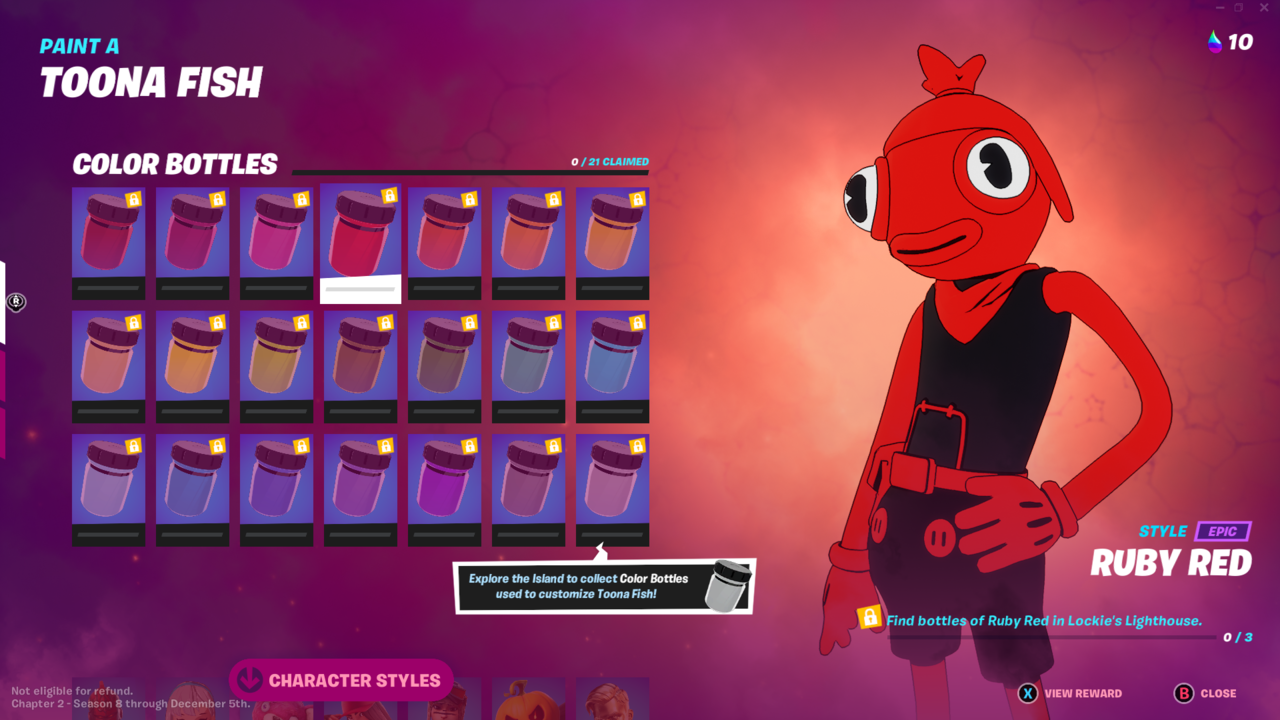 Fortnite Season 8 Color Bottles and Rainbow Ink are two new collectible items that you’ll want to grab in a hurry this season, as they will enable you to customize your Toona Fish character from the Season 8 battle pass. Unlike last season’s Alien Artifacts, there are already dozens of Color Bottles on the Season 8 map from day one. Here’s where you can find all of them and how to use them.

Rainbow Ink is a new randomly generated collectible you can find across the Season 8 map. You’ll need to collect these in order to unlock character-inspired colors in Toona Fish’s expansive customization menu. Right now, there are 21 character colors for Toona Fish inspired by other characters from Fortnite, like Jonesy, Peely, and Cuddle Team Leader.

That means to unlock every colorway in the category, you’ll need 210 total Rainbow Ink collectibles, though that’s just the start–another 21 character colors are planned for later this season. Unlike Color Bottles, which will be explained further below, Rainbow Ink can not be seen on the map as it can spawn in any chest–or not. It’s randomized, but in our early experience, chests seem to include Rainbow Ink more often than not.

Color Bottles go hand-in-hand with Rainbow Ink as a resource used to unlock any Toona Fish colors you may desire. While Rainbow Ink is needed for the character-specific styles, Color Bottles will complete those unlock requirements while also opening standard colors such as Knightly Crimson / Y-Labs Magenta and so on.

Fortunately for collectors, Color Bottles are not randomized. They can even be seen on the map when you’re nearby. Each colorway requires all three of its Color Bottles to be located before it’s unlocked, but once they are, you can change Toona Fish as often as you to want among unlocked styles.

There are currently 63 Color Bottles on the island, with at least 63 more planned for later this season to go with the aforementioned 21 new character styles. As they reliably spawn in specific locations, we’re able to share with you the locations of all of them.

Here are all Toona Fish colors and styles and where to find their related Color Bottles:

With the advantage of having these Color Bottles on your map when close by, they should prove to be a relatively easy grind that you could even complete in a day if you’re dilligent. We’ll be sure to update this guide whenever more Color Bottles are added to the game.

In the meantime, catch up on everything else new to Fortnite Season 8, like new weapons, the Season 8 battle pass, and the new map.