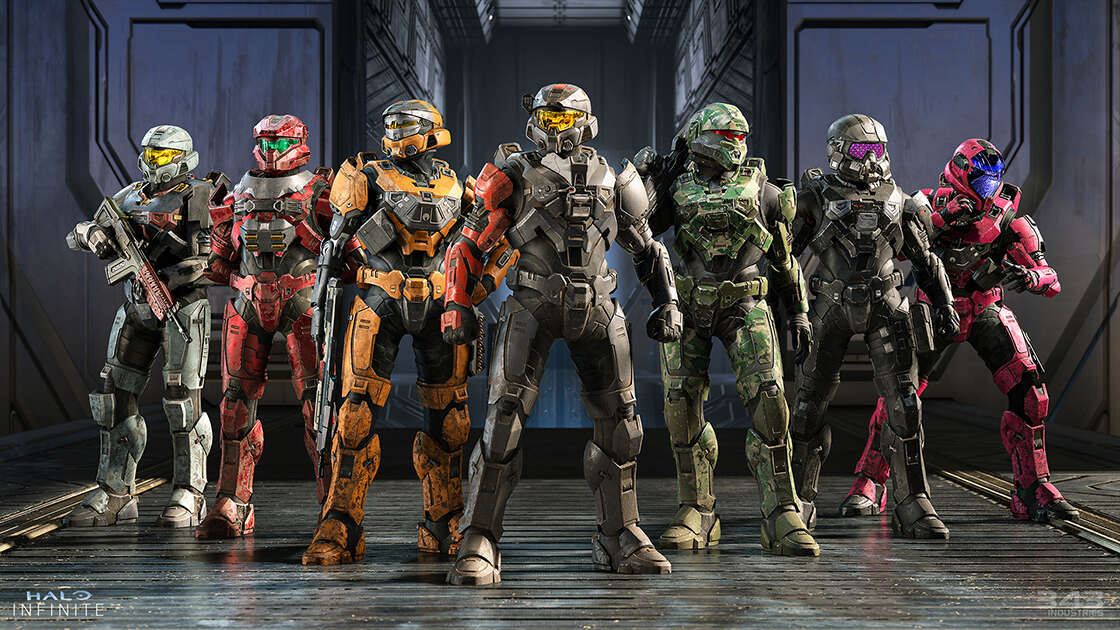 Halo Infinite marks a big change for the sci-fi series in terms of player progression for multiplayer, with the game focusing exclusively on encouraging players to advance through a battle pass-based system. There is no per-match XP and there will not be a separate XP progression system outside of the battle pass at launch.

In the September edition of Inside Infinite, 343 Industries responded to the feedback about this, saying it is “actively exploring” giving players more weapons to progress through multiplayer beyond the battle pass alone.

“We have heard community feedback around wanting more progression options including things like ‘match XP’ to feed into the Battle Pass and an entirely separate, incremental system along the lines of earning SR152 in Halo 5: Guardians,” 343 said. “Expanding multiplayer progression offerings is something the team is actively exploring, and we look forward to continuing to evolve the experience in future seasons post-launch.”

All About The Battle Pass

The “one primary progression path” in Halo Infinite at launch will be the battle pass exclusively, and many have voiced their discontent for this online.

The Halo Infinite battle pass includes free items and content you can unlock with real money. Some of the cosmetics to be offered include helmets, visors, and armor coatings. Some “consumables” like XP boosts can be unlocked by earning XP by completing challenges. “Every tier of the pass will require the same, consistent amount of XP to unlock from beginning to end. So, regardless of whether you’re working to unlock tier 2 or tier 52, each unlock across the 100-tier Pass will require the same amount of XP,” 343 said.

Outside of the battle pass for each new Halo Infinite multiplayer season, there will be “limited-time event passes.” These are free and they will be available during “specified event periods.” The progression track and rewards, too, are separate from the main battle pass. “In general, an event will be available from one to multiple weeks, including weekends, offering players multiple opportunities to unlock available rewards,” 343 said.

Halo Infinite’s Season One main event is called Fractures: Tenrai, and this is how players can unlock the Yoroi armor core. “This event will be available for all players approximately one week per month during Season One, and the event will come and go throughout the season; available for players to make progress. Each time the Fracture returns, your progress will carry over, giving players multiple opportunities to unlock all 20 tiers of rewards on the event pass.”

Halo Infinite will have weekly and daily challenges. One of the criticisms of Halo Infinite’s battle pass-focused progression system is that people might upset the natural flow of a multiplayer match in the pursuit of challenges. However, 343 said the challenges are–in general–designed to be “straightforward and never directly conflict with the objective of the match.”

“The specific Weekly Challenges a player gets are unique per player so while there may be some overlap, in general players won’t all be chasing the same specific challenges at the same time. This means that it is extremely unlikely that everyone in the same match will need the same ‘Get X Kills with the S7 Sniper’ challenge,” the developer added. “However, the total amount of obtainable weekly challenge XP is the same for every player. By default, all players will have 3 active challenges at any given time but players who purchase a Battle Pass will be granted a 4th slot. Again, the total # of achievable challenges and total potential XP available is the same for ALL players but Pass owners will get one extra ‘active’ slot as a perk.”

If a player completes every weekly challenge, they will receive an “Ultimate Challenge” that will pay out a unique reward like an armor coating or an emblem.

Here are some examples of the weekly challenges you could receive:

And as an example of an Ultimate Challenge:

For daily challenges, these are aimed to be the “XP drip” for progression in the battle pass. “Daily challenges come in three varieties starting with the ‘easy tier’ and progressing into challenges that have slightly higher and more specific requirements,” 343 said. “Initially, players will have a large pool of daily challenges along the lines of ‘play any multiplayer match’ which awards XP for playing any MP mode that operates on a trusted server (i.e. Bot Arena, Arena, and BTB playlists). Once a player has completed all of their ‘Stage One’ Daily Challenges, they’ll move into ‘Stage Two’ which includes a slew of dailies that now awards slightly more XP but requires playing PvP matches (i.e. Bot Arena no longer counts). And finally, once a player has exhausted all their ‘Stage Two’ challenges for a given day, they move into ‘Stage Three’ which awards slightly more XP for winning multiplayer matches.”

Daily challenge allotments will reset each day, taking players back to Stage One. 343 said it should take about 16-18 hours to run out of daily challenges, so unless you are playing an extreme amount of Halo Infinite each day, you should always have more to do.

That said, 343 again acknowledged that some players want a per-match XP system–but it’s not happening. It’s all about the battle pass in Halo Infinite multiplayer.

“While we understand the community’s feedback around wanting a steady drip of match XP and more ways to earn XP for the Battle Pass, we are optimistic that the system available at launch will give players adequate means of continually having something to accomplish and a means to progress,” 343 said. “Looking further ahead beyond launch, we expect these systems to evolve in direct partnership with player feedback.”

Another element of Halo Infinite’s free multiplayer are what are called “challenge swaps.” Players are able to change out one of their assigned weekly challenges–but this does not apply to dailies. As mentioned above, challenges are assigned different difficulty tiers, and the game won’t let you swap a harder one for an easier one to avoid players taking advantage of the system to grind through the battle pass faster. Challenge swaps can be unlocked through the battle pass or the limited-time event pass, or they can be purchased with real money. Some challenge swaps will also be available through “partnerships and promotions.”

Finally, 343 discussed Halo Infinite XP boosts, which will give players double XP for their weekly and daily challenges. XP boosts are timed for 30 minutes, but this is not final; 343 is still evaluating what duration might be best. XP boosts can be unlocked through the battle pass, by purchasing them with real money, or through promotions and partnerships.

The full blog post runs through a ridiculous amount of depth and detail on Halo Infinite’s multiplayer and progression system–go read it here.

Halo Infinite has two more multiplayer betas coming up, the first of which begins this weekend and is focused on 4v4 Arena Slayer. The next will let players try out Big Team Battle.