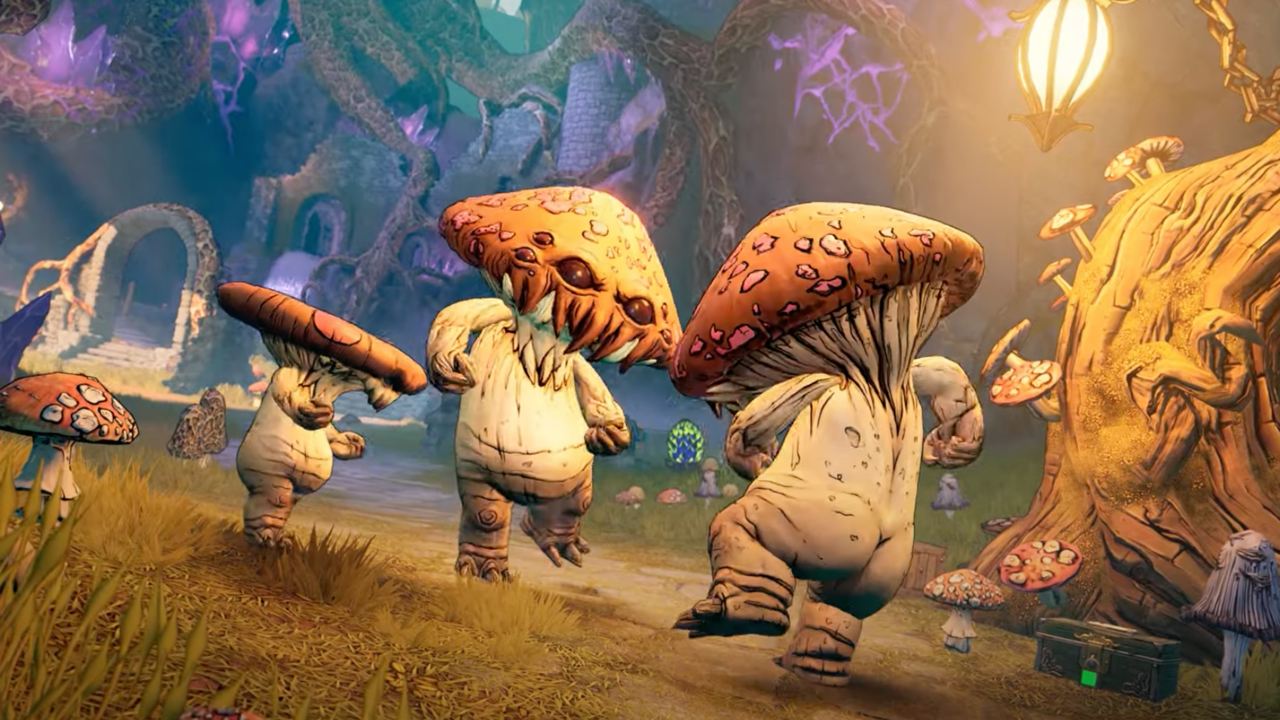 2K and Gearbox have announced many new gameplay details for the upcoming Borderlands spinoff Tiny Tina’s Wonderlands. In this update, Gearbox provided new details on some of the game’s classes, shed more light on its various environments, and shared more information about spells and melee mechanics.

Tiny Tina’s Wonderlands has a multiclass system that lets you mix and match from six different character skill trees, and two that Gearbox is revealing today are Stabbomancer and Brr-Zerker.

“Stabbomancers are sneaky, critical-hit-focused assassins who summon magic whirling blades to the battlefield and disappear into the shadows at will. They are all about creating and capitalizing on opportunities. The skillful Stabbomancer exploits foes’ weaknesses to stealthily strike vital targets to bring enemies down before they know what hit them.”

“Brr-Zerkers are tenacious, frost-infused bruisers who complement their firepower with an onslaught of brutal melee attacks. They are hardy warriors who hail from the frozen mountains, with a long line of ancestors who trained their bodies to withstand and even harness the bitter cold of icy winters. In battle, Brr-Zerkers prefer to do their fighting up close and personal, taking point on the front lines as a whirling maelstrom of exceptionally chilly death.”

As for the environments players will explore in Tiny Tina’s Wonderlands, the game takes players to a “huge diversity of environments,” each of which has its own distinct look, missions, quests, and enemies. Here are some of the locations that Gearbox is announcing today:

In terms of monsters, players will encounter an enemy faction called Skeleton Army, and these are undead beasts who come back to life, though they don’t remember anything from their past lives.

Additionally, Gearbox announced that Tiny Tina’s Wonderlands will have an overworld element to the gameplay that is a nod to tabletop gaming. In this overworld, players get a third-person, bird’s eye view of what’s happening in the game world. “Your character’s heroic proportions are shrunken down, allowing you to explore the many nooks and crannies of the game board. Some discoveries might be minor–a shortcut here, a smattering of gold-filled chests there–but you could end up stumbling onto an entirely optional area that some adventurers might miss entirely,” Gearbox said.

Gearbox also shared some details on how spellcasting and melee works. Most of the game’s spells have short cooldown periods so you can fire them quickly, and they are deadly. Some of the spells light your enemies on fire, others send them flying in a contained tornado. Still other spells can protect allies or help your cooldowns recharge faster. As for melee, players get one melee weapon at all times, and it can come in handy in a pinch. “It’s not likely to take precedence over the gun in your right hand and the spell in your left, but weaving a few close-up strikes into the flow of combat can go a long way,” Gearbox said.

Check out the images and video embedded in this story to see more of Tiny Tina’s Wonderlands. The game launches on March 25 for console and PC.

Fortnite
December 5, 2021 0
Fortnite Chapter 3 has arrived! Here are all the high-level changes you can expect before we dive deeper into the new Fortnite world.
Read more

Fortnite
December 4, 2021 0
Some questions were answered, but even more were asked.
Read more

Here’s What Happened In The Fortnite Chapter 2 Finale Event

How To Make Custom Treasure Maps In Sea Of Thieves: Quest Board And How To Bury Treasure