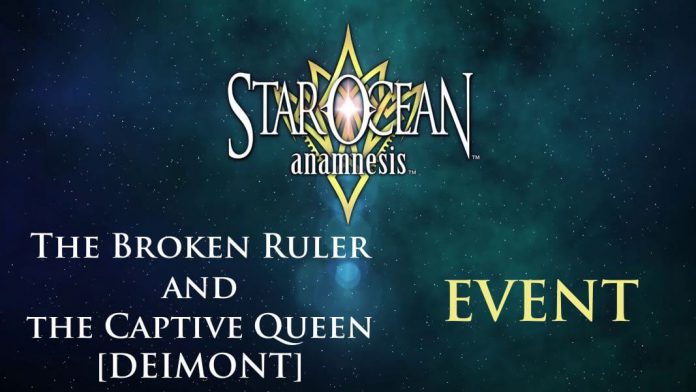 Guide for the upcoming Deimont boss battle, since it was announced!

Icicles are shot, similar to Freezing Waltz, in an X formation at opposite corners of the map, These spawn Deep Freezes. Then it shoots another set of icicles falls down in a + formation (in the gaps). When the Deep Freezes explode, they will each strike a wide area around them for fatal damage.

As you can see, there’s a lot of dangerous magic and magic-looking attacks going on here, and many of them will flinch-lock you. That makes both anti-flinch and stunning very important, so it’s highly recommended to bring Roddick and Viktor. Summer Myuria is also a strong pick, but is hamstrung a bit by Thunderfire Slash’s backstep–make sure to maintain close range so you don’t trigger Millioneye’s ranged attacks!

Slower casters like Myuria may have a rough time with the constant spells and fields, so Maria, Reimi (note: 40% INT damage reduction!) and Summer Miki are preferred picks for ranged damage. Summer Reimi may be a valuable accompaniment for her ATK buff and nullification of Rush Drain Fields, though she may struggle with her own slow rush build and Deimont’s constant activity. If you must bring a healer, Summer Sophia can suffice with her fast casting times and elemental weakness (which in turn helps stun), and she also nullifies the Slow Fields.

Millioneye begins the fight with an immediate, random attack. 90% of the time, this is going to be Reaping Slicer on the host, so said host is best off hanging away from their allies until Millioneye’s casting animation (he will wave a tentacle aside), to keep from endangering them.

While anti-flinch works wonders against him (when does it not?), all the defenders in the world can’t save you if you’re caught under Ancient Rock. Thankfully he only uses this on melee targets, which makes his “floating away” tell easy to spot. Ranged aggro have to contend instead with Bloodtear, which is no less deadly and its tell is obscured by a too-low camera angle.

On Misery 2 and up, Paralyzing Waltz is the biggest threat. This is due to the camera obscuring its tell, how fast the icicles come out, and the generally high damage that they do (and that’s before they become Deep Freezes!). Be ready to dodge if you see him float in any upward direction–paranoia is better than death. Ranged will also have Deadshot to contend with, so it becomes ideal to utilize a melee defender rather than kite with shooters.

None of this would be too difficult if it weren’t for the fields. On Misery 1 their formations are out of the way, but Misery 2 and up have them litter the entire stage and rotate between three patterns. They linger for entirely too long and Millioneye tends to be hyperactive during them. If you find your team struggling with the fields (or flinching under Reaping Spark/Ancient Rock), opt for safety and Rush to clear the stage.

Grand Finale is no joke. If you run out the enrage timer, he will spam it. The pattern for the deep freezes is an X formation then a + formation shortly after, though it may be hard to spot based on stage position. There ARE safe spots you can stand in at the edge of the map between freezes, but it is probably safer to time dodges against the edge when the explosions happen.