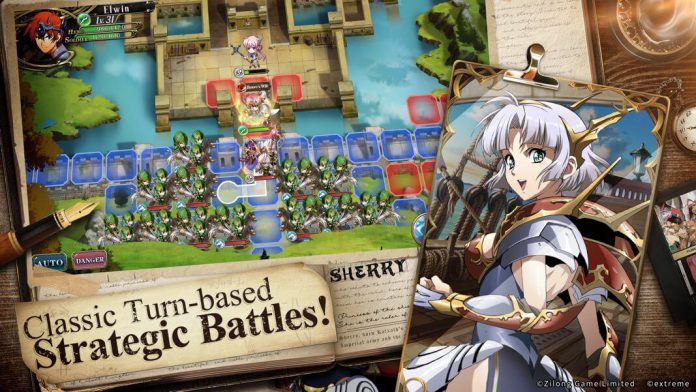 A unit in Langrisser Mobile is a combination of a Hero and the troops he/she leads (consisting of 10 soldiers) . The hero and the soldiers have separate health bars. A unit is defeated when the hero’s health bar reaches 0, regardless of if the soldiers have any HP left. Generally speaking, soldiers act as a shield for heroes, and incoming damage will hit the soldiers before they reach the hero. However, certain skills/unit attacks may cause hero damage simultaneously, or even bypass soldiers completely to hit heroes directly.

Langrisser Mobile features a total of 12 different unit types, including: Swordsman, Piker, Cavalry, Flier, Naval (Aquatic), Mage, Cleric, Monster, Archer, Assassin, Dragon and a Boss type. Each hero must fall under one of these 10 unit types, and his/her troops must be one of the types as well, although the hero and the troops do not necessarily have to be of the same type.

Combat in Langrisser Mobile is carried out on Maps. Maps are divided into square tiles. Each unit occupies exactly 1 tile, including bosses (currently there are no bosses that occupy more than 1 tile).

Certain types of Terrains (forest, ramparts, etc.) have a defense bonus associated with them, increasing whoever is standing on tiles of that terrain type to gain extra defense (physical and magical) against all attacks.

A unit’s mov stat is the lower one of the hero’s mov and the troop’s mov. If a 5 mov hero uses 3 mov troops then the final mov stat of the unit will be 3, and vice versa. Terrain penalties applies to hero & troop type, taking the worse penalty of the two (i.e. Cavalry hero + flier troops will suffer terrain penalties when passing through forest terrain as cavalry, flier hero + cavalry troops will also suffer as cavalry.)

When an enemy is within a unit’s attack range, the unit will be able to attack that enemy, as shown by a crossblade icon on the enemy. Different units have different attack ranges, starting from 1 (i.e. can only attacking enemies on adjacent tiles) to 3 (able to attack enemies within 3 squares). If a unit is capable of attacking an enemy from multiple positions, it is possible to move the unit to the desired position first before issuing and confirming the attack command.

A unit’s attack range is the higher one of the hero’s range and the troop’s range. HOWEVER, do note that if an enemy is within the hero’s attack range but outside of the troops’, ONLY THE HERO CAN ATTACK, and vice versa, causing overall damage to be reduced (reduction could be significant).

Certain units have active skills that can be used on enemies or allies, including physical skills, healing spells and damage spells (single target & aoe). Skills are used in the same way as attacks – move to position, choose skill, choose target, confirm. Active skills go into cooldown once used, the number of rounds before the skill is usable again is described in the skill description. A skill with a X turn cooldown can be used every X+1 turns.

Certain heroes in Langrisser Mobile has the ability to guard, i.e. take damage for allies. Guarding only works against targeted skills or normal attacks. AOE skills cannot be guarded.

Buff/Debuff duration in Langrisser M is NOT counted in overall turns, but rather in actions. A buff that lasts “4 turns” in fact lasts for 4 actions. Certain characters have skills/passive that grants extra turns, which makes the same buff/debuff expire faster than on his/her allies.

There are two types of dispels in Langrisser Mobile:

There are two type of battles in Langrisser Mobile:

The reason to make this distinction is because certain passives skills / item passives may have the description “before/after combat” in them, which means these passive skills will ONLY PROC IF YOU ENTER COMBAT. Only skills/items with “before/after actively causing damage” in description can proc on AOE skills/other out-of-combat skills.

Combat outcome is determined by a number of factors:

So what you see may not be what you get. Beware!

Langrisser Mobile is a turn-based strategy RPG, and as such, the main gameplay involves strategic planning and actual combat. Actual combat mechanics have been explained in an earlier section, and here is a brief introduction of an integral part of strategic planning: Developing your heroes (characters).

As was written earlier in this Langrisser Mobile guide, any unit deployed on the map must be led by a hero. Developing heroes is the bread and butter of Langrisser’s power-up system.

Heroes can be obtained in 2 ways:

Player can spend in-game currency (gem aka jewel, obtainable through in-game activities and also purchasable with real money) to buy gold tickets (Trinity Vouchers) to gacha for heroes. Overall gacha rate is 2% for pulling an SSR hero, x% for an SR hero and rest are all R heroes. There are only 3 N heroes in game and that the protagonists all players start with.

Pulling additional copies of a hero from the gacha pool will turn them into shards which can be used to upgrade a hero’s star level.

Gacha banners: There are 2 types of gacha banners (exact terminology may change when the actual game releases):

Certain events reward hero shards. If a player does not have the hero yet, he will be able to combine 50 of these shards into a full hero.

There are a number of properties related to a hero that will decide his overall combat performance:

Each hero in Langrisser Mobile has a personal passive (perk? Not sure what the official translation is) that is unique to this hero. The hero passive functions passively (obviously) but is not considered to be a passive skill, and at the moment cannot be disabled in any way.

The types of hero passives can vary greatly, from straight stat bonuses (Lance: +x%atk/def against fliers/cavalry) to special buffs (Tiaris: healing light) to stat transformations (Bozel: uses 1.5x mdef as int/x% chance to inflict a random debuff on target(s) whenever he deals damage) to combat passives (Elwin: has a x% chance to drain 30% of damage dealt after combat),etc.

Hero passives can only be improved by upgrading the star level of a hero. R tier heroes can upgrade their hero passive 5 times (1->6), SR 4 times, and SSR 3 times.

Hero passives are usually the biggest factor in character planning. Certain upgrades in hero passive can greatly improve a hero’s effectiveness: i.e. Sherry’s passive Wild Princess 3*->4* upgrade reduces the passive’s proc cooldown by 1 turn, which means she can have double turns every 3 turns instead of 4; Shelfania’s passive: Kin of Magic reduces the cooldown of all spells she casts by x turns, and her 3*->4* upgrade makes her able to cast all spells with 2-turn cd non-stop.

Different heroes have different stats growth rates, marked by the letter (C, B, A, S) to the left of the stats on the hero stats page. However, there seems to be some level of variation within the same level of growth rate (certain characters get more ATK than others despite both having the same growth rating, etc.), so the growth rating might not be the most accurate indicator of a hero’s true stats and should be used with some level of caution.

Below the exp bar and above the stats on a hero’s stat page, there are 1 or more icons. This shows the factions the hero belongs to. Clicking on the icon will display the name of the faction and all heroes in the faction (owned heroes are highlighted while others are dimmed).

Being in a faction gives no direct benefits, but rather access to faction-specific faction buffs (super buffs).

Certain heroes in any given faction have access to a type of skill called “faction buffs”, which, when cast, grants all player controlled units on the battlefield within that faction 3 or 4 buffs for 4 rounds (actions). The faction the skill buffs is written in the description of the skill so check carefully if the skill will be able to buff your party members before bringing the skill to the battlefield.

The buffs granted by faction buff skills are:

And certain heroes’ faction buff skill grants an additional special buff which will be covered in the next section of this Langrisser Mobile guide.

A number of SSR heroes offer a special buff with their faction buff skill. These are:

This is a formatted version for better reference experience. Special credit: