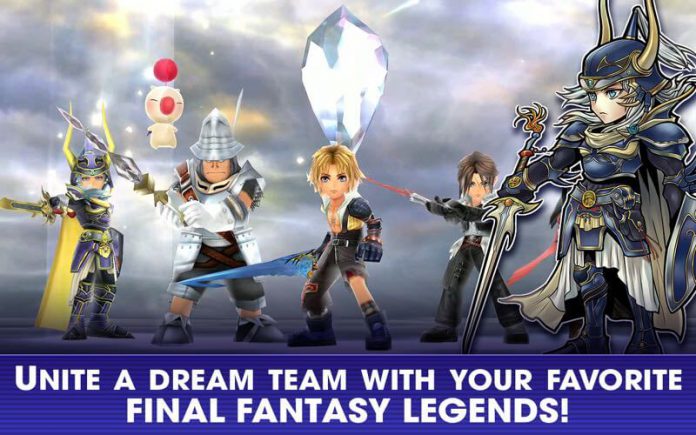 The much talked about Awakenings are upon us. We have seen slow and steady tuning passes so far – such as patch buffs and the introduction of 35 CP weapons – but none as wide scale as this. Instead of the slow trickle of a new weapon over the next year or two, Awakenings present a huge and significant raise in power across the board that aggressively shuffles about the character rankings and metagame as we know it over the next 7-8 months.

As a method to restructure the game, Awakenings will naturally bring about many new concepts, mechanics, and terms to the table. It can be a bit overwhelming, especially for players just joining in now or in the future, so this will be a series of essays over the next few weeks before Awakening that will hopefully help some to better prepare for the greatest change to hit DFFOO yet.

Awakenings is the term used to describe a level cap raise in DFFOO. Several characters will be chosen in waves to have Crystal Level 51-60 unlocked. These 10 Crystal levels grant a LOT of new strength to characters. The pattern is usually as follows:

Stats increase by the following amount depending on a character’s base stats:

Stats increase by the following amount depending on a character’s base stats:

As you can see, Awakenings give considerable stat boosts. Even if you invest into a single Crystal Level for a character, the stats they gain from the 10 extra Character Levels is a signifcant power up. Finishing the Crystal Levels will double that bonus, except for DEF which triples with Crystal Levels. For those players who leveled all their characters’ Crystal Levels to 20 before moving on, leveling all Crystal Levels to 51 is a viable strategy. For a measly 5 T4 Crystals, your characters get a significant boost to their stats and you have a wider array of usable characters instead of sinking all your eggs into one basket. Something to consider when you’re planning on how to spread out your resources.

Characters gain large personal or group invisible buffs that have a conditional requirement – such as being buffed or having an enemy debuffed – that increase one or more stats anywhere from 10%-80%. That’s right, up to 80%. This effectively alters character stats which can no longer be based on their Base Stat Category. For example, Warrior of Light is in Category 2 MAX BRV. BUT he gets a 50% MAX BRV invisible buff whenever he is buffed putting him ahead of some Category 3s that don’t get any increase to MAX BRV. Passive Buffs basically restructures the stat hierarchy for all characters, so when comparing stats, be sure to include these in your calculations.

Also known as Extendeds, the 2 Abilities of the character gain new properties. This can be anything from a simple potency increase to a complete rework. For example, Tidus’ Slash increases the potency by 20% while Warrior of Light’s Throw Buckler gets an HP attack added onto it and Yuna’s Cheer becomes an AoE HP heal. This is usually the greatest increase in power that Awakenings bring and is a way for the developers to retune character kits for better expansion moving forward. It also helps them correct any imbalances 35 CPs may have caused. For example, Tidus’ Quick Hit should have been his de facto BRV shaver, but his 35 CP put Slash’s potency to a level that made Quick Hit a practically obsolete. Extended Quick Hit raises Quick Hit’s potency to a significantly higher amount than Slash.

How Do Awakenings Work?

Awakenings require a new resource in the form of High Shards, or T4 Crystals. The requirements per Crystal Level are as follows:

So how do you get T4 crystals? Exclusively through Event Co-ops, LCs, and Heretics. The easiest and most common way is as rewards from an Event Token Shop, but they usually only reward 100 for the event character’s crystal color and one off-color. For LCs, be prepared to complete the highest difficulties and score challenges WITH the featured character. And for Heretics, well, be prepared to clear the hardest content in the allotted time.

How Should I Plan for Awakenings?

THE REST OF THIS SERIES ASSUMES WE ARE FOLLOWING THE JP SCHEDULE TO A TEE, which is admittedly unlikely. I fully expect SQEX to announce as we get closer that we will be given more T4 Crystals than JP ever got and render my 8 guides completely worthless.

The reality of the situation is that players will have to regularly clear the hardest content in the game to reap the most rewards. While there are many who play this game casually or skip events, this basically means if you aren’t hardcore with a stacked roster, you have to pull pretty regularly to get as much of a limited resource as you can. You need to complete the hardest content as it comes out to get T4 Crystals to strengthen your characters to complete the hardest content as it comes out. It’s a “rich get richer” cycle. You have to stay current to keep current, otherwise you will fall behind. But fret not, this is only for meta completionist players who need to complete everything. If you are just playing for fun and don’t mind skipping out on EXs and score challenges, it’s not a big deal.

But I am here for the meta players. I have been busy in my retirement. I have ventured into gacha lands beyond that are far more hardcore and long lived than DFFOO and I have returned a changed and hardened man. Before, I used to try and portray every character I evaluated in a positive light and give joke scores and ignore the “Should I Pull?” question. I naively believed that I was doing the community a favor by preaching “You can do whatever you want! Have fun!” These are words I still stand by, but you don’t need 5000 word evaluations to tell you to “have fun.” That goes without saying.

After sinking my teeth into much more hardcore gachas such as Gran Blue Fantasy, Final Fantasy Brave Exvius, and Final Fantasy Record Keeper, I realized something: coming fresh into a 4+ year old game is intimidating. You have a limited amount of resources to drop on hundreds of characters when only a handful are viable. You cannot ever hope to catch up and experience all the content unless you REALLY followed a baseline meta. I found myself grateful to those who preached a meta and found posts like mine wholly unnecessary.

And here we are. DFFOO is extremely young. Not even a year in GL, not even 2 years in JP. It’s on a similar growth rate as Final Fantasy Record Keeper – seriously, their growths and changes are ridiculously similar – and that game now has, like, 7 different weapons and 7 different armors for each of its hundreds of characters in its 4-year run. Awakenings is the beginning of a harsher meta. EXs follow soon after. And we’re only 1.5 years in. Who knows what the future holds.

The Awakening Era is going to be the first time in DFFOO you have to carefully consider your resources. It is impossible to Awaken every character going forward, and it’s only after an entire year that the most hardcore JP players are coming close. Barring special campaigns, you’re looking at 1 or 2 characters per crystal color a month. And you’re getting a wave of Awakenings a month, not counting LCs and Event Characters.

There will also be a lot more restrictions such as completing Heretic score challenges and completing LCs WITH THE FEATURED CHARACTER. This means that you have to have a well-built roster across the board as the Heretics will now be built for Awakened characters and you need a well-built character that you probably never use for every LC as well. Now more than ever will people need to know which characters and weapons can keep their heads above water.

So now I have returned to help those who are looking to get the most out of their resources and for new players who are coming in to catch up as quickly as possible. I’ll ignore all comments about how I’m bashing someone’s favorite character or being unfair. Luckily for all of us, in my absence, a slew of evaluators have stepped up. Now you can have Decrith or the others give you the fun RP evals and character appreciation threads. Our community has grown and so has the variety of our content. Of that, I am so proud.

In the following weeks, I will evaluate all the characters coming in the first wave of Awakenings, as well as compare each character to the next two waves so the players can decide who you would like to prioritize Awakenings for. Hopefully by the end, the player base will feel like they are entering the Awakening Era fully prepared.