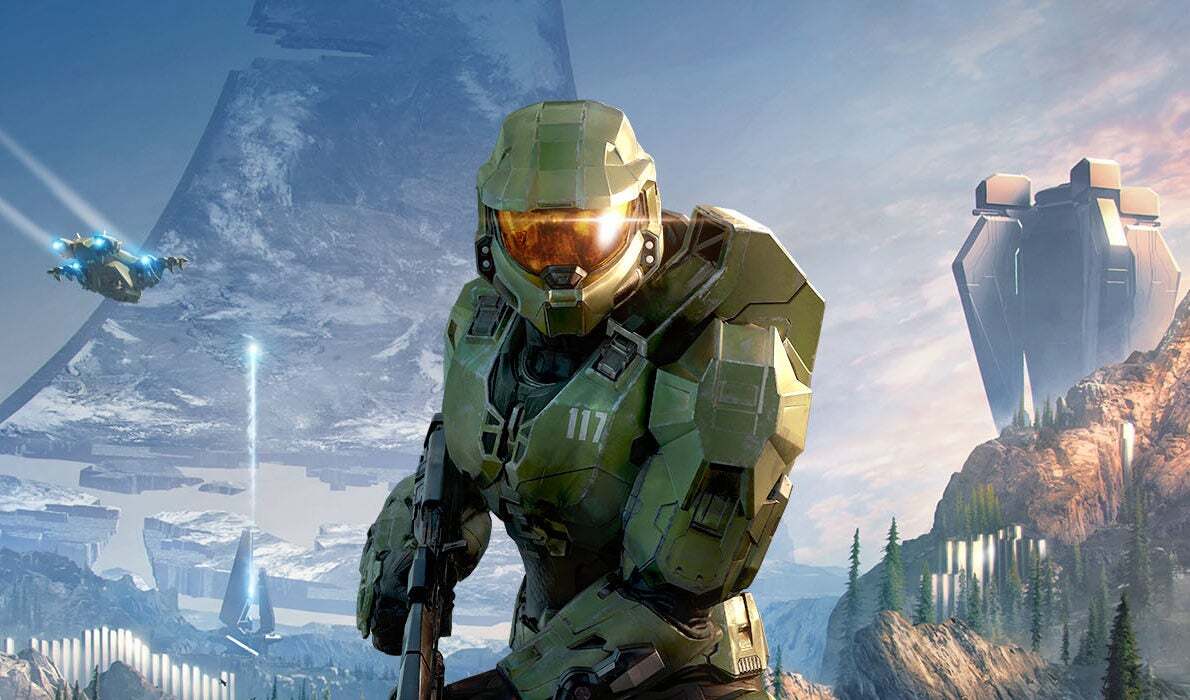 In the opening moments of Halo Infinite’s campaign, a despondent pilot says to Master Chief, “You have one bullet against an entire army, what can you do on your own?” Chief, with all the stoicism that fans have come to love him for, replies in that iconic gravelly voice, “It’s enough.”

After a couple of lackluster entries, I’ve been feeling less and less drawn to the Halo franchise, so it was difficult not to read into that moment. For me, once a diehard fan, Halo Infinite feels like developer 343 Industries’ last shot at reinvigorating my fandom. And, based on what I’ve played of the campaign, it might just be enough.

The campaign makes an incredibly strong first impression by way of a dramatic cinematic sequence. Halo Infinite sets up the drama of its narrative by placing the story in the shadow of Master Chief’s failure, which is laid bare when he is discovered and thawed out by the aforementioned pilot.

While Chief floated through space, cryogenically frozen, the Banished carved a bloody warpath through the UNSC’s forces. For all intents and purposes, the fight is finished, and the Banished are on the cusp of victory; the death blow will be dealt to humanity when they secure control over Zeta Halo. It’s in this state of affairs, and what Chief represents within it, that I found myself starting to remember why I loved this franchise–and character–so much.

The as-yet-unnamed pilot represents the reality of the world Halo Infinite takes place in. He has lost much and his desperation to survive and return to whatever semblance of home remains for him is evident. At every opportunity, he implores Chief to walk the other way when a battle approaches. The pilot doesn’t see victory as a possibility: only more death and destruction.

But, as before, Chief is once again that voice of hope. His fight to save humanity begins with a tumble through space, weaving through a wreckage as he scavenges whatever guns and ammo he can find to give himself a fighting chance. As he does, somber piano keys play, and it feels like the return of a hero, who is throwing himself at impossible odds just because it’s his duty. Admittedly, this sounds like pretty much every other Halo title in existence, but what distinguishes Infinite is that this narrative setup, and the emotional weight it trades off, is supported by the gameplay.

The first three missions of Infinite’s campaign are classic Halo affairs–it feels familiar and comfortable, the way you might feel when fighting through a set-piece in one of the first three Halo games. The fact that Infinite begins by successfully evoking those games is, to me, a great sign. These missions are a display of stunning sci-fi architecture in which you battle through tight corridors, frantically gunning down scurrying Grunts who squeal in that comedic way they do, eventually emerging into more open rooms where you can slip behind cover and leap around as you trade blows head-on with Brutes or try to stick tricksy Elites with grenades. It’s that classic Halo gameplay that begins with a single shot and before you know it, you’ve gun-fired, grenaded, and melee’d your way through dozens of enemies and cleared out a room: smooth, scrappy, and oh-so-satisfying.

Much of these first few missions are spent setting the stage for the story. Without spoiling anything–and because I don’t know exactly where it’s going and how it’ll pan out–Cortana still has an important part to play in the narrative, gone though she supposedly may be. Her presence is weaved into what happens in a way that gives her the presence of an invisible hand guiding events. Though it’s early, there are also hints at grappling with themes of mortality, legacy, and responsibility, which is an exciting prospect for a franchise as storied as Halo.

With the grappleshot, there’s a sense of dominance you can exert over the battlefield that feels genuinely exhilarating

Where Infinite truly came into its own, at least for the few hours I played it, was when it let Chief loose in an open world. Here, changes made to the Halo gameplay framework that felt awkward in previous games felt at home in this new one. The setup is simple and I daresay overly familiar, given the prevalence of open-world action games, but within the context of Halo, it feels fresh and exciting.

Chief is dropped onto Zeta Halo and a few markers are placed on the map. Some lead to a main mission that will progress the story, while others allow you to help out UNSC soldiers who have found themselves in a spot of bother. There are high-value members of the Banished army that you can attempt to take out, or Spartan Cores to track down and use toward improving your equipment. In the time I had, I was able to improve the cooldown of the grappleshot and even give it the ability to stun enemies briefly. There were also options to improve the performance of my shield, with other equipment and upgrades clearly also yet to be discovered.

Also dotted around the map are forward operating bases that have been overrun by Banished. By wiping out the occupying forces here, Chief can take them back and allow UNSC forces to establish a stronghold. Doing this is incredibly satisfying because it allows you, as legendary super soldier Master Chief, to descend upon unsuspecting enemies and lay waste to them, expertly picking them off one-by-one in a hail of bullets and bombs. The enemies react to your presence, some running away in terror, others brazenly attempting to hold their ground.

These FOB missions felt like big battles, but contained locations within a larger open world. The enemies didn’t feel like pushovers and I often found myself with my back up against the wall. This is where the grappleshot, which allows Chief to hook onto surfaces and propel himself, came into play, and it is a genuine gamechanger for Halo.

Even in the little time I have spent with the game, I can’t see myself playing another Halo without it. The grappleshot brings a sense of dynamism to the Halo combat experience that it has so sorely been missing, amidst shooters like Call of Duty, Battlefield, Apex Legends, and other, more energetic contemporaries. The grappleshot introduces strategic considerations that just didn’t exist before, letting Chief pull items and objects in the environment to him, whether that’s a gun or an explosive canister. It allows him to latch onto enemies and quickly close the distance to deliver a crushing melee attack right to the face, and then swing into the air and out of sight just as quickly.

With the grappleshot, there’s a sense of dominance you can exert over the battlefield that feels genuinely exhilarating. And even out of combat, moving around the vast open world is made all the more enjoyable by the grappleshot. I was able to scale cliff sides with ease, and leap from ridiculous heights and land safely simply by grappling at the last moment. At times, I felt like a pebble skimming across the top of water, and it was a delight.

These elements alone bode well for the open-world format. Moving around Zeta Halo with the grappleshot and then descending upon entrenched Banished to clear out FOBs alone feels like it could be a great new addition to the Halo formula, and one that modernizes a franchise that, for me, has been struggling to find a comfortable new groove to work within in the post-Bungie era.

But, I think the broader implication of what the open world and the various missions offered within it represent is way more exciting for me. The first few missions of Infinite feel like 343 saying it knows that it has some work to do still; that it needs to prove that Halo, and Master Chief, still have what it takes. And that is exactly what it feels like the game is about: Unlike the last few games in the series, Halo Infinite doesn’t just want to say Master Chief is a legendary Spartan, it wants you to prove it.

Iron Banter: This Week In Destiny 2 – Crucible Tips For Jumping Into Halo Infinite

Destiny 2
December 3, 2021 0
Here's how to transfer your Destiny 2 skills to Halo while you're waiting for the 30th Anniversary to drop.
Read more

Quake just got an official Horde Mode, in the year 2021

This Arcane character could make a surprise reappearance in season 2