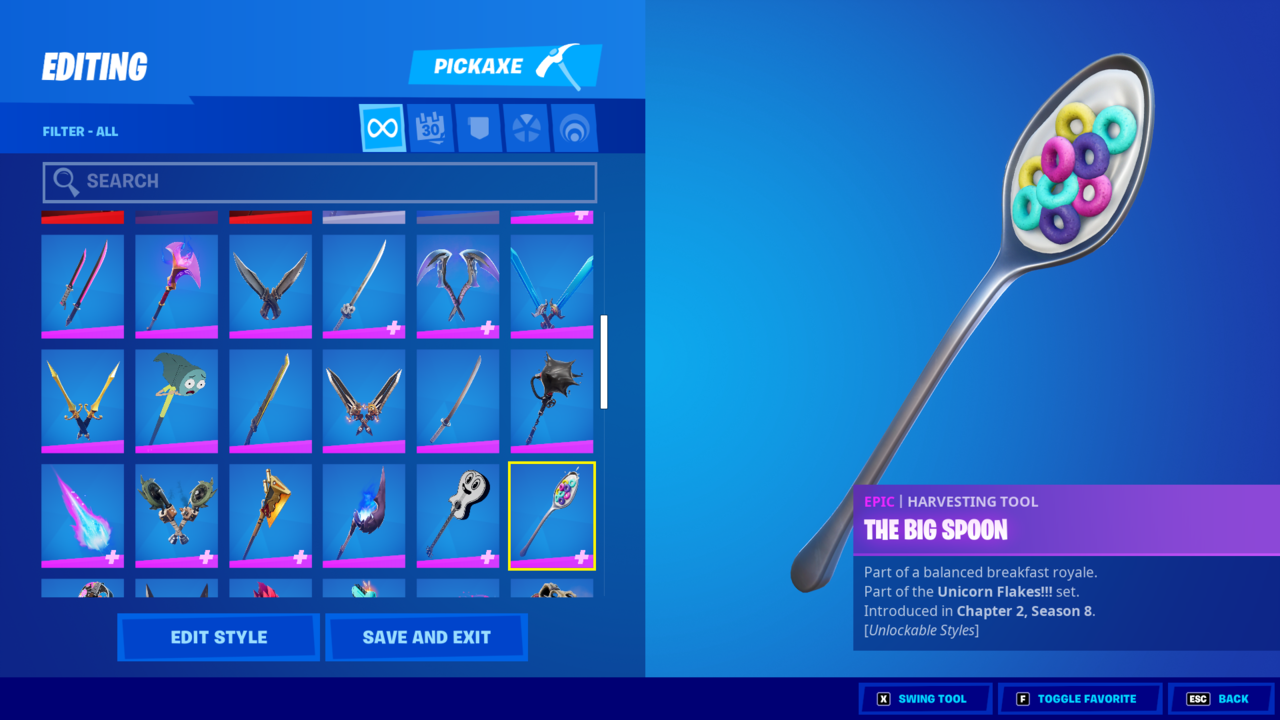 Fortnite pickaxes are one of the more fun accessories in the Item Shop because so often they exist as already iconic melee tools of the heroes whose sets they are a part of. Things like Aquaman’s trident and Daredevil’s batons come to mind as classic handheld objects that exist outside of Fortnite. When we talk about the best pickaxes in Fortnite, you can bet many such weapons will make the list, but we’ve saved some spaces for Epic’s original creations too. Here are our choices for the best Fortnite pickaxes so far.

Horizon: Fort-bidden West. Is this anything?

The aptly named “Aloy’s Spear” is, of course, Aloy’s spear. This weapon is taken right out of Guerrilla Games’ massive Horizon series and made the seamless transition to Fortnite when Aloy arrived in 2021. Should her spear get a makeover when Forbidden West comes out in 2022, it’s safe to assume the Fortnite version will too. Epic likes to keep its skins current.

Finish the fort. (Come on, this is definitely something.)

If we’re going to spotlight a PlayStation hero, it makes sense to do the same for Xbox. The green team’s iconic Master Chief arrived in the game in 2021 and brought the beloved melee weapon, the Gravity Hammer, as his pickaxe. It’ll take a few more whacks to dispatch enemies in Fortnite than it does in Halo, but the hammer’s likeness translates perfectly as a demolisher of houses, stones, and cars too.

Make no plans to die today.

The coolest thing about Mjolnir is it behaves just like it does in the Marvel movies. Only those worthy of wielding it can do so. That means if you try to equip it with any skin other than Thor, it won’t work, and instead will display as the default pickaxe in Fortnite. But there’s one fun exception: Captain America can wield it too. (Spoilers?)

Toona Fish’s back bling also made the cut in a similarly exclusive list, and it’s hard not to think everything in his set will make the cut, because it’s all so fun-looking. Stringles is the sentient acoustic guitar that Toona Fish straps to his back in the Inkville story universe within Fortnite. It’s the same world inhabited by Toon Moewscles–and maybe some future cartoonish skins too. With more than a dozen colorways to choose from, Stringles is a rare customizable pickaxe too.

Stake through the heart, and you’re too late.

Victoria Saint, the resident vampire hunter of Apollo, carries this ornate, sometimes stabby, sometimes slashy pair of daywalker-dispatching weapons. Among original characters, Victoria is one of the coolest, and that’s owed in part to her stylish Helsingesque accessories like this one. I love an Epic original character whose inspiration is clear at first sight. With this pickax and her vial of blood back bling, it’s clear as the day her enemies dodge that Saint isn’t so saintly.

Part of the Boundless Set of custom superheroes, this energy sword-shaped mass of light is fully customizable across several visual categories including colors and shape. Just like the heroes themselves, you can really make this pickaxe your own, so no matter what your cape and cowl’s color scheme, you’ll be able to channel your supernatural powers to match.

Four years down, an eternity to go.

The Hooplah Hammer is the newest pickaxe on this list, as it launched as a limited-time free cosmetic earned during the Fortnite fourth anniversary celebration in the fall of 2021. While Epic always gives out free goodies for its game’s “birthday,” this fourth birthday pickaxe is the best of them yet. Each cake slice has its own physics and every slash with it ends with a splatter of cake and sprinkles.

Mancake: “She laughs at my dumb jokes when no one does.”

Everyone misses the Butter Barn, but through Mancake and his iconic flapjack-enhanced rifle, Josie, the memory of the syrupy sheriff’s HQ lives on. I love an item like Josie, because its name implies a backstory that we don’t have yet. But precedent also implies we’ll get it someday. As an Epic original character, Mancake and Josie’s story will unfold at the company’s own pace, so it could be a while, but I’ll wait patiently.

Take me to your lead singer.

Like some skins, the special trait of Orbital Abductor is that it reacts to music. Bring it to Apres Ski or carry it near a car radio and you’ll see its yellow rings vibrate and spike like a seismograph, even getting more pronounced for louder, bouncier music. Though it’s part of the Opening Act set for Sunny’s in-game band, its design makes it a good fit for many different skins.

Spoiler: The breakfast is still balanced if you drop the sugary circles.

I saved perhaps my favorite of all for last. Launching as Fabio Sparklemane’s own massive Unicorn Flakes-eating utensil, the colorful Big Spoon comes in three colors to match Fabio’s various styles. It looks ridiculous, but then so does Fabio, and even after four years, it’s nice to see Epic can dial up something so completely absurd.